This article was originally featured in Nine Honey
By Jo Abi
Featuring Shichida families, Jane Harris and her daughters Mischa and Tora, and Vicki McQueen and her daughter Zoe.

I have a funny feeling I was the only parent who didn’t realise my children should have started reading and multiplying before they began Kindergarten.

Apparently, there is a new wave of children who hit the ground running when starting school. Their parents made a point to ensure they do everything they can to advance their children’s education.

Some enrolled them in programs at six months of age.

I wish I’d know about programs like the ones they used.

Silly me thought it was up to me to teach my kids to read and add, and then after my fledgling efforts, hand them over to the capable hands of trained educators to get the job done properly.

One such program some parents are using is called Schichida Australia and I spoke to a couple of mums whose children completed the program.

Vicki McQueen, 33, who lives in Mosman in Sydney, enrolled her children in the program so starting school wouldn’t be such a shock to the system.

“Zoe, five, has been reading since two-and-a-half,” she told 9Honey. “Axel, three, isn’t at the reading level yet.”

McQueen said when she started reading books to Zoe, she noticed her daughter would read the sentences along with her. 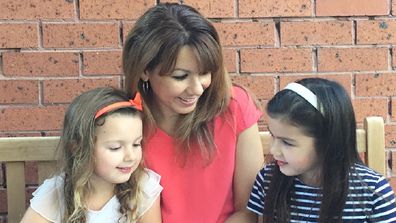 “Zoe was very interested in books and I found when I would be reading a sentence she would read along with me. She just naturally picked it up.

“We were doing a program and they would be reading a book and if she saw a word that she hadn’t seen before, for example, the word ‘cool’, when it got to page 11 of that book she would recall that word once you had explained it to her.”

The five-year-old started Kindergarten this year already knowing how to read and do basic maths.

“We had a meeting before she started school when she was four and she picked up a book and was able to read it. The interviewer said she’d only seen one other girl come into Kindy knowing how to read.”

Jane Harris has two daughters who were both able to read by age four.

Harris, 38, said the program helped Tora, seven, and Mischa, five learn to read, as did share storytime with them each night.

In this episode of Honey Mums, Mel and Kel talk about trying to have fun as a mum, babysitters behaving badly and they also catch up with Nine’s Shelley Craft to discuss her parenting style:

“In speaking with my kid’s teachers when they started school, certainly when Tora started, there were very limited expectations for reading and writing,” Harris told 9Honey.

“It seems more and more kids around school seem to be able to read basic texts.”

Although some parents are keen for their kids to learn to read before beginning school, Harris said at her children’s school, there’s no pressure or expectation.

“My daughter’s school, they allow them to read at the level that they’re at. Depending on where they are, regardless of where they are so if they’ve never read or are a more advanced reader, I’ve found the school that we’re at has catered to that.”

Book your 50 minute introductory lesson for just $60.00 – limited to one lesson per child.